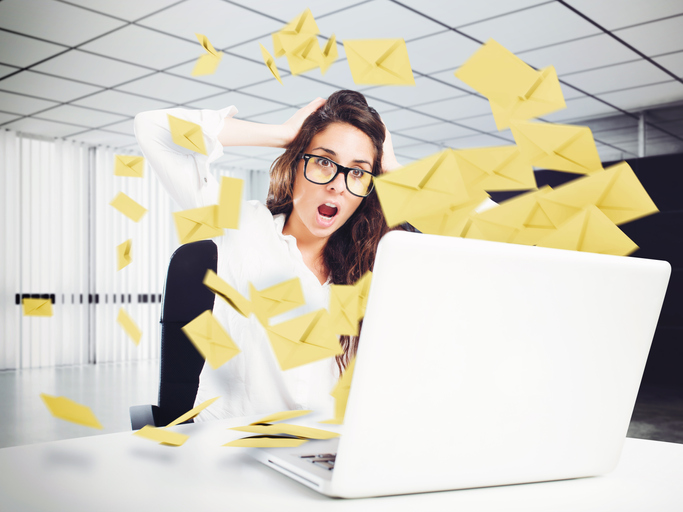 If you’re a typical marketing manager, you are likely checking your email and Slack messages all day, and maybe even well into the night. This consumes too much time, but more importantly, it’s not a smart way to manage a team of “knowledge workers.”

Two important lessons from the past and the present guide how I manage the knowledge workers on my team.

The first lesson comes from the past, during one of my first jobs at an ad agency. The second comes from an amazing book from Cal Newport called A World Without Email: Reimagining Work in an Age of Communication.

Lesson 1: Not everyone gets to play in the sandbox

I learned lesson #1 WAAAY back in the early 2000s. I was a copywriter at the time, and I was in a meeting with one of the principles, Kay Krebsbach. She told me something important about working at an ad agency:

“Not everyone gets to play in the sandbox.”

If you’re a copywriter, for example, you might show up to work every day, have a great attitude, and get all the training known to humankind. But if you can’t write a headline, you’re out.

That simple statement has stuck with me, and I think it’s especially apropos if you have to manage knowledge workers. They have a certain inherent ability that can’t be trained.

Knowledge workers are relatively autonomous. You just have to put them in a room (or sandbox) and get out of their way. So what’s your role, besides making sure the coffee machine is loaded up and you’re delivering the occasional pat on the back?

The answer takes me to the present-day solution, and, in the words of Newport, the “hyperactive hive mind.”

If you’re not familiar with Cal Newport, he’s an author and computer science professor at Georgetown University. His work focuses on being productive in a distracted digital age.

Newport is a big proponent of working in focused chunks of time, without digital distractions. In A World Without Email, he takes aim at our preoccupation with email and how we spend endless hours writing, replying to, and checking those little digital missives.

For Newport, the problem isn’t necessarily email itself; it’s actually an inherent feature of digital messaging, namely the perpetual writing and responding that it requires. As he notes: 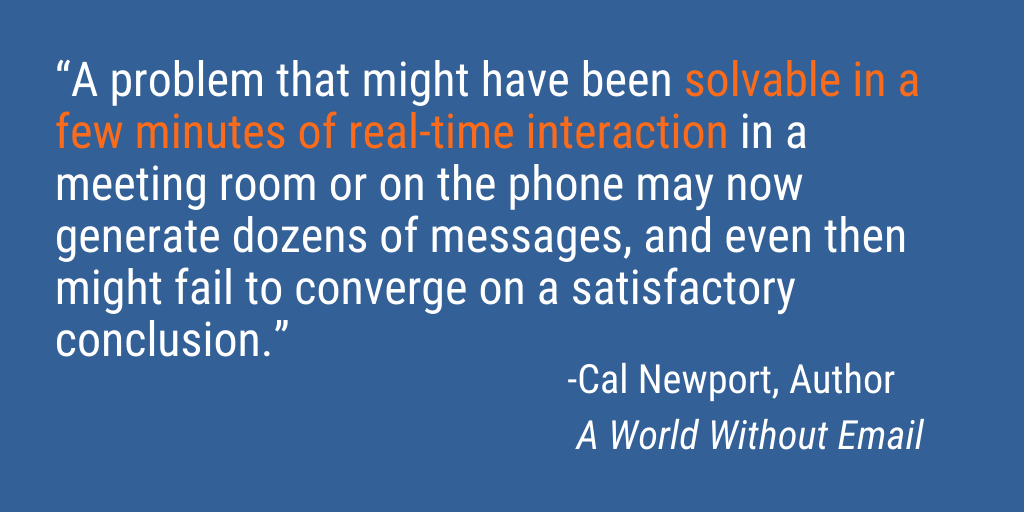 He refers to this as the “hyperactive hive mind workflow.” You know it well. You spend an entire day answering messages, putting out email fire after email fire, and at the end of the day, all the meaningful work you had to do just doesn’t get done.

Even worse, it  can actually create new problems. How many times have emails caused minor disagreements to escalate, as words are misinterpreted and feelings are hurt? (Newport notes that one-dimensional text fails to include body language and tone of voice, which can have an enormous influence on communication.)

Fortunately, Newport shares plenty of solutions in his book. We put one of them to practice.

Newport writes about a marketing firm led by an entrepreneur named Devesh. Like everyone, Devesh’s firm was overworked, burnt out, and as you’d expect, drowning in email. So, they experimented with a radical departure from the norm.

The firm decided to meet twice a day for approximately 30 minutes, right before extended work block times. During that meeting, they discussed what they’re working on and any issues they had. Then they’d get to work — and refrain from sending any emails. If an issue came up, they’d save it for the next meeting.

Not surprisingly, this resulted in drastic reduction of emails. I decided to employ the same tactic at Winbound, although with a slight twist.

Members of our team do our best work in the morning. I like mornings because my mind is fresh and I have mental energy. (By the way, I’m writing this during my morning work block.)

We decided to meet after the morning workblock at 10:30 am for a half hour. We talk about what we’re working on for the day, and bring up any issues specific to the projects. That’s it.

The results have been very positive. Our marketing specialist Ryan Olestro summed them up in a LinkedIn post:

3. You can still get a hold of someone if it’s urgent. We aren’t overly strict about it. The idea is that since we reduce the “noise” of communication, the signals we do receive become more important and deserving of our attention.

4. We avoid long email strings by discussing issues over Zoom, staying late during our daily meetings and hashing things out so problems aren’t left unresolved.

5. It makes using email communication as a tool to get out of doing hard work, harder. Let’s face it. For many of us, responding to email is great lazy work.

6. You respect others’ time more. By showing restraint in your communication, you’re letting others on your team know that you don’t want to throw off their work groove.

One of our content writers, Jason Sweet, also added that he had initially thought the daily meeting would be a big time-suck, but because they’re focused and move quickly, they’re not that huge of an intrusion.

The meetings are also a chance for some human interaction, which may be overlooked for knowledge workers.

Focus on workflows, not the work

So what’s the moral of the story?

It’s that as a marketing director, your goal isn’t to tinker with what goes on when knowledge workers like Jason and Ryan head to their respective sandboxes to get things done.

It’s to ensure that the workflows around them are as efficient and non-intrusive as possible. Your job is to improve the processes that govern the workflow, or the “Process Principle,” as Newport refers to it:

By implementing changes like the 30-minute meeting, you’ll improve the workflows for your team and make them more productive.

But the impact goes far beyond productivity, and it addresses an issue we tend to overlook in these days of pandemic isolation.

When asked how he liked our daily meetings, content writer Jason Sweet said, “I just like to see everyone.”

That’s something we can all use more of in our workflows.

Learn how to make a Digital Twin of your sales team. Download our complete Digital Twin Manufacturing Marketing Guide!