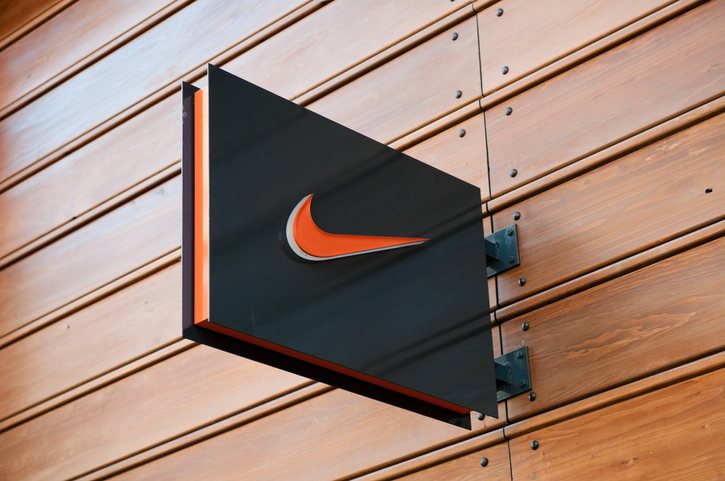 Nike’s Colin Kaepernick campaign may be more than a publicity stunt, as some have called it. Judging by the lively discussion at the American Marketing Association – Madison’s September 12 conference, it may be a new direction in customer experience strategy. 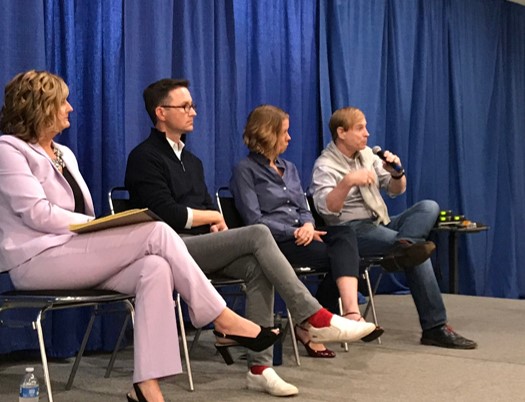 The topic was Nike’s campaign featuring Colin Kaepernick. And while the panelists were professional and articulate (take note, Washington, D.C.), the issue inspired plenty of opinions and passion.

The ad that launched a thousand marketing discussions

Unless you’re rooming with the likes of the Unabomber, the ad created an uproar that transcends sports, prompting Nike sock burning and presidential tweets (surprise).

None of the marketers really took issue with the mechanics of the ad, which is usually where we direct our critique. Instead, the point of contention centered on the merits of a major brand supporting a divisive figure.

Was Nike taking a side, and would it hurt the brand? Would customers walk away, and sales and stock prices take a hit?

Brands must be cautious — or should they throw caution to the wind?

Russ Klein argued that using Kaepernick had nothing to do with the fundamental branding of Nike and its 30-year-old, aspirational mantra, “Just Do It.” He cautioned against the approach, as he also did in this post, in which he wrote: “…it is my counsel to brand owners that it is unnecessarily dangerous, commercially or morally, to drape a politically incendiary cape around your brand and delude yourself into thinking it makes you a superhero.”

Klein followed up with me later and said, “Had Nike come out with advertising that was in some way patriotic but took an implicit or explicit shot at Kaepernick, I would find it equally ill-advised.” 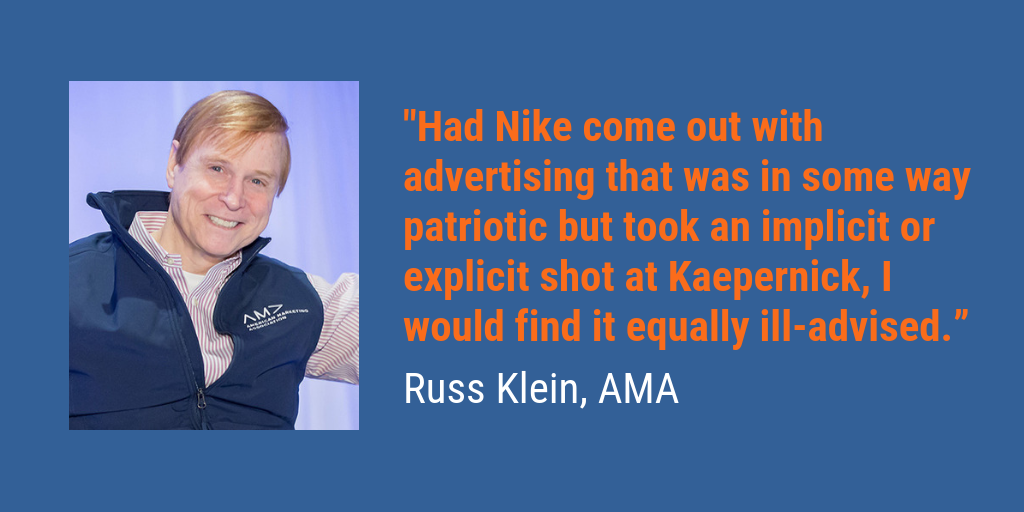 Jessica Best and Kristin Uttech took issue. They argued the ad showed that Nike had done its research. The company knew that its customers, particularly Millennials and Gen Z, want companies to take a stand.

As Jessica Best notes, “If we’re good marketers, we mark down who we’re FOR… and who we’re not for. And that means sometimes taking a stand that will alienate some people. But it might just make your core stronger.” 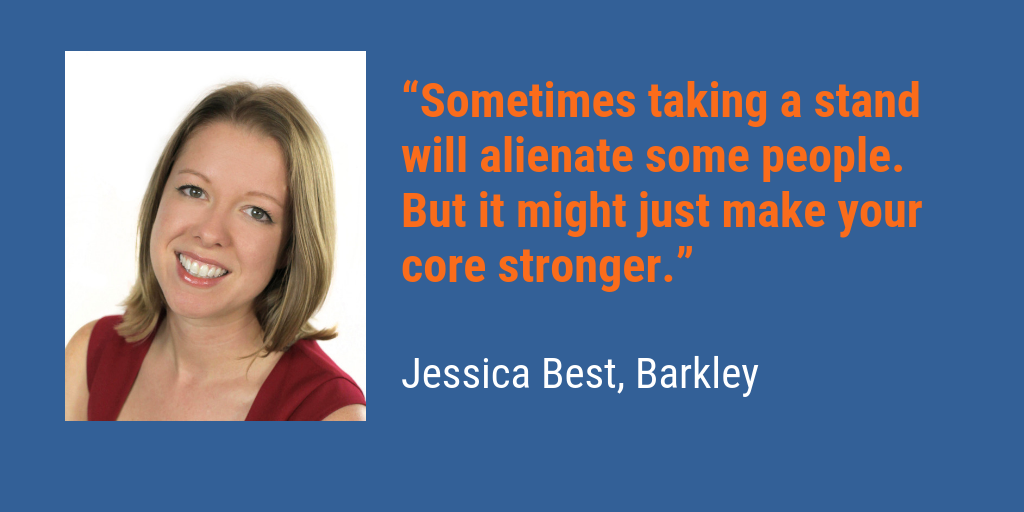 Recent data backs her up:

Andy Crestodina did not jump into the fray, but advice from his earlier presentation suggests the tactical brilliance of Nike’s move.

Andy has said numerous times that the two types of content that have the most impact (and drive most links) are proprietary research and opinion-based pieces. He notes the key is to trigger emotion, and that doesn’t always require controversy.  Andy tells the following story:

“Fortune favors the bold. And Nike’s controversial move has certainly generated hundreds of millions of dollars worth of press. They took a stand and triggered a lot of emotion. But you don’t need to be controversial to trigger emotion. 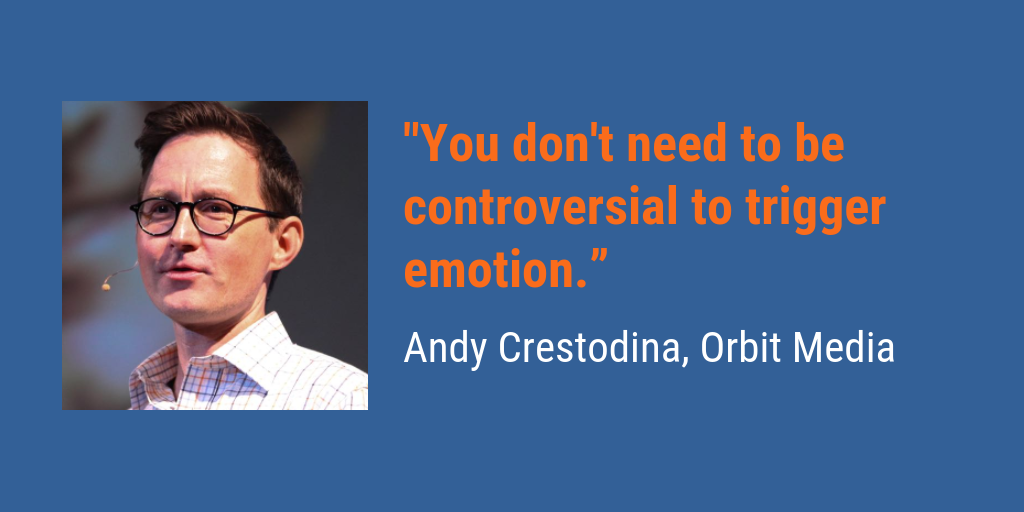 True story: I’m in a bar with some marketers talking about the power of strong opinion. What topics would get traction? Someone brought up gun control, which started a short debate. Then someone mentioned the Oxford comma …and a fight broke out. People started calling names and throwing punches. I hid under a table for safety.

You don’t need to be controversial to trigger emotion. There are lots of ‘safe’ topics that people feel very strongly about.”

Nike produced an amazing piece of opinion-based content, and from a marketing and PR perspective, it generated a ton of buzz.

But it doesn’t appear to have been designed simply to shock people and snag headlines. It may actually be a harbinger of something much bigger on the landscape, and it all has to do with the “customer experience.”

Four hours prior to the battle royale, Russ Klein had delivered the keynote address highlighting the importance of experience design. Experience design essentially involves designing all components of your business to ensure an optimal user experience.

Russ shared research indicating customers are more focused on experience with a brand than even product or price:

Those numbers are eye-opening, but hardly surprising in today’s world of reviews, social media sharing and customer-created content. Russ summed it up: 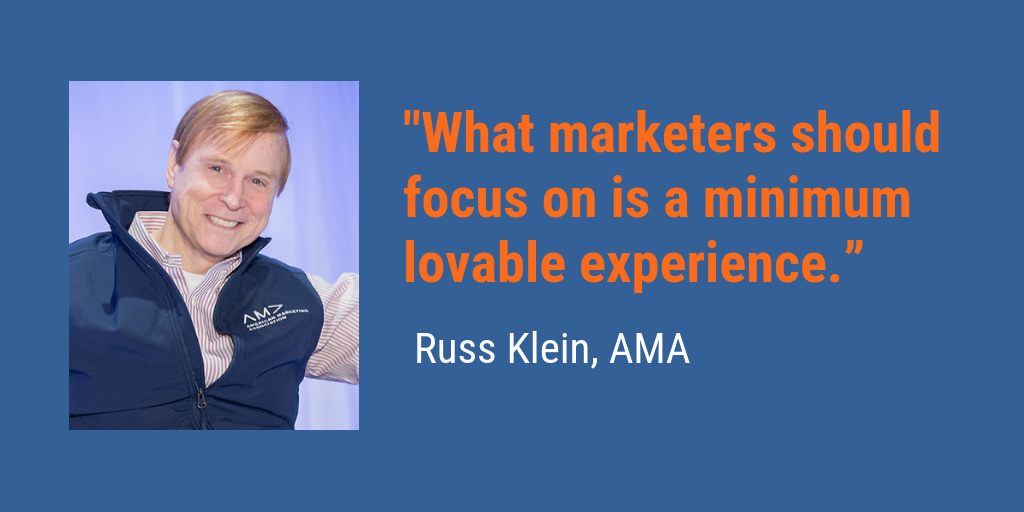 “When my friend stays at other hotels, he tells me he dreams about DoubleTree’s cookies,” Phelps said.

It’s amazing to think a chocolate chip cookie can sway a buying decision. But it does. We’re emotional human beings, not robots. We like cookies. It makes for a great experience. It’s why, according to Phelps: 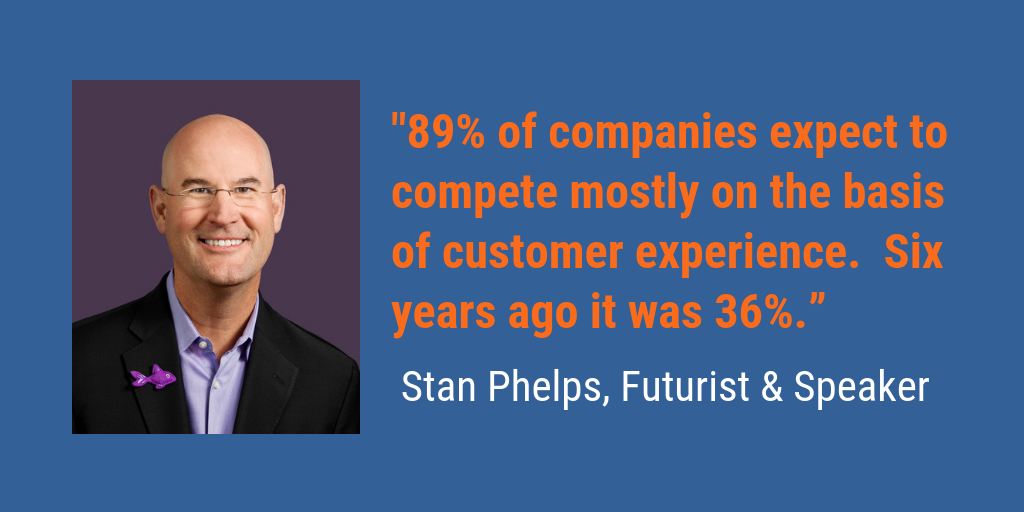 Smaller companies have been doing this for years

This type of activism may be new on the national scene, but small to mid-sized companies have been doing it for years. Bill Penzey of Wisconsin-based Penzey’s Spices is extremely outspoken. Here is a quote from an email newsletter:

“Two weeks ago Nike, in a truly Eureka moment, found marketing gold in celebrating the honest American patriotism in respectfully taking a knee for Black Lives Matter. This same marketing gold is right there for the NFL owners should they choose to embrace it. I’m guessing many will resist for as long as they can.”

Penzey digs deeper on the topic, but it’s a lot more than you’d expect in a newsletter to customers who buy spices.

Is this a case of Penzey really understanding his target marketing, and taking a position to appeal to them? Reading his email and looking at Penzey’s website, you get a sense that this company would be espousing these types of values, no matter what. But the company is growing, and the person who forwarded me the email loves the Penzey’s stance.

Since corporations can “speak” their minds, we want to know them

The research is showing us that the Bill Penzeys of the world are being welcomed by Millennials in the mainstream. And guess what? Millennials are teaching old dogs new tricks. Data from Sprout Social shows their attitudes toward companies are widespread:

The tendency to turn a blind eye toward the behavior of corporations may be changing. We’ve generally been complacent that a corporation could influence legislation, as long as our shoes were cheap and our investment portfolios swelled.

And since the 2010 Citizens United v FEC ruling, corporations and unions have become more influential than ever before. As the ruling states:

“Political spending is a form of protected speech under the First Amendment, and the government may not keep corporations or unions from spending money to support or denounce individual candidates in elections. While corporations or unions may not give money directly to campaigns, they may seek to persuade the voting public through other means, including ads, especially where these ads were not broadcast.”

“Spending is speech,” noted The Center for Public Integrity, which means corporations can spend a lot of money to have their say. But what they’re saying may matter more than ever, and the rise of customer experience gets the credit.  (This is provided we can get legislation that mandates full disclosures of contributions, which isn’t exactly happening.) 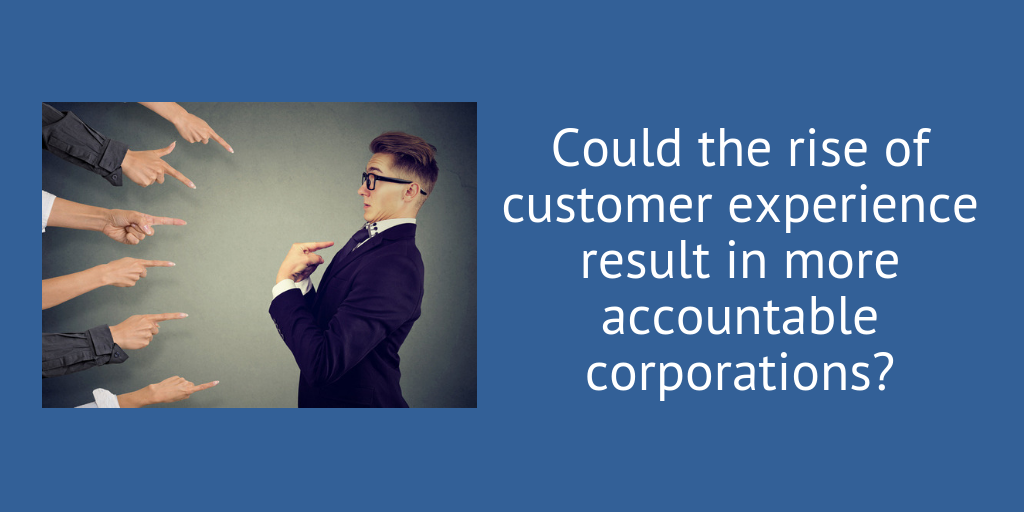 The marketplace is correcting: Nike is the new normal

Yes, big money can still buy politics. Since Roman times, that’s been the way it goes. And sorry, folks, no government legislation is ever going to end that. Not here in the home of the brave and the land of the unregulated.

But Citizens United may soon encounter the law of unintended consequences.

Sure, your company can wield Death Star-like power over elections, legislation, etc. But your customers are now judging you on far more than what you’re selling. They’re buying you for what you are, and what you stand for.

Maybe the era of customer experience is not just a trend, but a massive marketplace correction of unchecked corporate influence. Wouldn’t that be great? 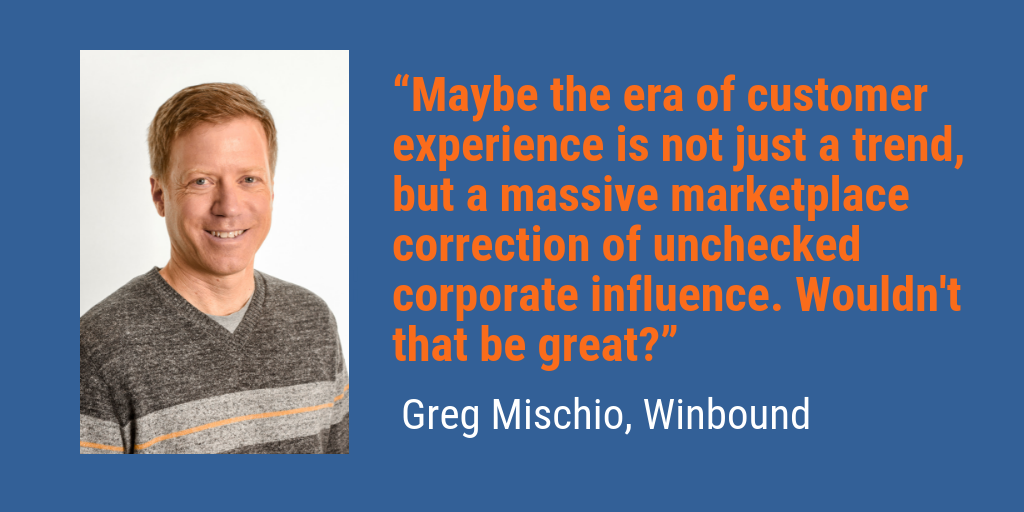 A new dance move that we all must learn

I’m not naive here. I’d like to think I’m hopeful. And what I’m most hopeful about is the idea that if brands take a stand, then by virtue of working for them and buying from them, you will, too.

I’m a fifty-year-old Gen Xer. I’m prone to cynicism like the rest of my generation. Yet I write those words because I feel a tide is turning. It has to.

While he wasn’t on the panel where most of this argument took place, Gene Hammett of Core Elevation may have delivered the conference’s encapsulating quote of the day. And perhaps the most important: 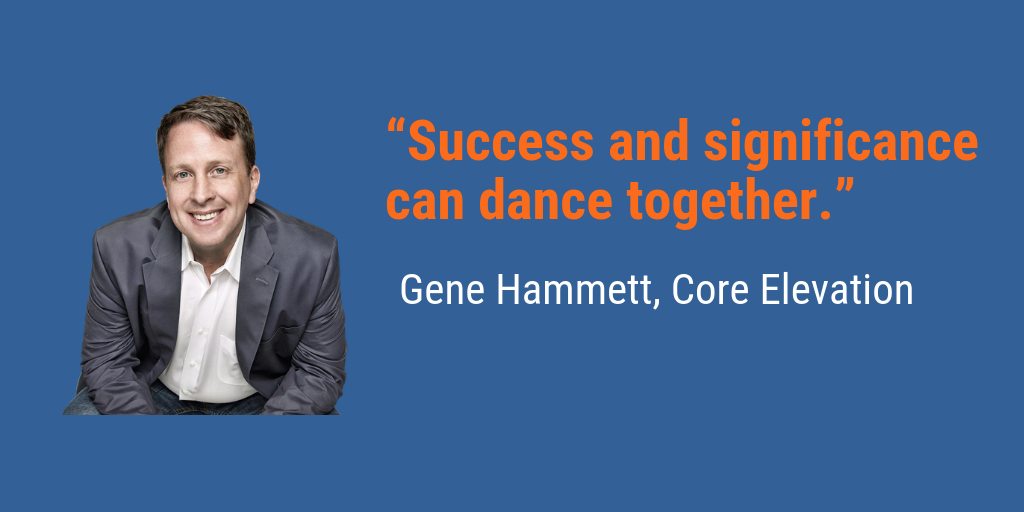 When last we checked, Nike is proving Gene right. Since the ad started running, “Nike maintained its product pricing structure, offering less discounting and sold out of 61% more merchandise since the ad began running.” (Source)

And when this post published, it was reported that Nike’s shares were selling at an all-time high. (Source)

Am I telling you that your marketing should embrace a cause, take a stand, and fight the good fight?

Actually, I prefer not to give my opinion on what you should or shouldn’t do with your marketing. I prefer to let your customers tell you what to do. And if customer experience is going to become as important as the research indicates, then taking a stand may not be an option.